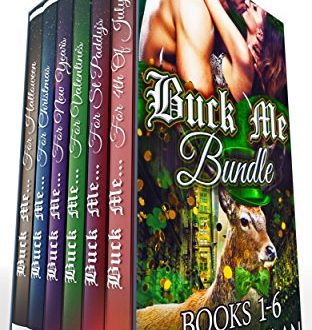 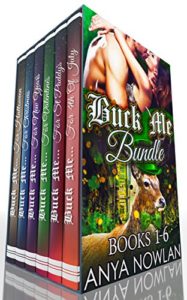 This holiday season, things are about to get bucked up!

Stags and holidays go together like shifters and mates and it’s the latter that these brothers are looking for! The Frost brothers, seven brothers with simply mystical jobs working for a certain man named Nick, are all on the look-out for their fated mates and as luck may have it, they find them on the holidays! Grab this novella boxed set if you’re looking for a little fun and humor with your hot shifter loving. The women are curvy, the situations are wild and the men are… well, magical!

Grab the first six books in the series here for a discounted price!

Buck Me… For Christmas

Blitz Frost is a man on a mission. A workaholic like no other, this buck has been sent to cool his heels at his family’s cottage in Shifter Grove before the busiest few days of the year for him and his 8 brothers – Christmas! He had no intentions of enjoying it. None whatsoever. So when he finds himself rescuing a gorgeous, curvy damsel in distress and loving every second they spend together, this were reindeer is obviously thrown for a loop.

Can Blitz save Christmas for Riley? And can she save save him…

Buck Me… For New Year’s

Dash Frost hates the post-Christmas lull. Having drawn the short straw that year, he has been sent to Shifter Grove to attend the ball and put up a Frost family presence – the last thing in the world that the workaholic pilot would like to be doing. In the midst of showing anyone and everyone his displeasure, a scrumptious, curvy woman manages to monopolize his attention. What was supposed to be a quick fling refuses to stay as such.

With almost a whole country between them and New Year’s Eve fast approaching, can the surly, troublemaker buck make the choice his heart wants to make?

Buck Me… For Valentine’s

Cupid Frost is a workaholic set loose on Valentine’s Day, the one time of the year that he despises more than anything. For a stag shifter with a birthday on the date, one would think he’d get along better with the holiday of hearts and love, but that’s the furthest thing from the truth. Suddenly falling in love and finding his mate was certainly not what Cupid had planned for the most dreadful weekend of the year…

With a crazy ex on the loose and fate seeming to screw them at every turn, can Cupid and Zaria find their way together, or is the curse of Valentine’s Day a real thing for these two?

Buck Me… For St Paddy’s

Kelly Callahan is committed to the family business. Working at the family pub, the Callahan’s Shamrock, she’s prepared for a hard weekend of Irish fun when St Paddy’s rolls around. But what she wasn’t expecting was the hot pilot… or the danger she could get in when she’s cornered in an alleyway. So what’s a girl to do – trust the irresistible buck, or ignore her gut and try to handle everything herself?

With her father sworn against any of his daughters dating shifters, can Kelly and Pran find one another or is this one romance that won’t have a lucky ending?

Buck Me… For 4th of July

Comet Frost is over getting dragged into things. Despite his brothers’ best efforts, this stag shifter with a checkered past adamant about not being a disappointment to the one person whose opinion he ever cared about. Second chances may come and go but he’s certain there isn’t one in the stars for him.

Until, of course, it is.

Buck Me… For Halloween

Samarra Alderley is a curvy woman who is done letting life get her down. The talented event planner has decided to take life by the horns and even if her ex-boyfriend cheated on her and tried to take half the company she built, Samarra has stubbornly decided to not let it distract her from putting on the coolest haunted house Salem has ever seen. And Salem has seen a lot of haunted houses!

There’s only one little problem. The hunky delivery guy who keeps messing with her mind!