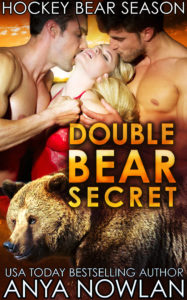 A little white lie never hurt anyone, right? Unless it pucks everything up, of course…

Lily Douglas never ran from anything and she’s not about to start now. As a private detective, this curvy woman has seen the worst side of people. What’s the point in love if the guy always cheats? So when she meets two hockey players on an undercover mission who are as attractive as they are secretive, she knows it can’t lead to anything good.

But is it a crime to want to find out?

Crash and Connor Rawlins are tabloid darlings, and not by their own choice. The werebear twins messed around with the wrong woman, and she knows exactly how to turn it into cold hard cash. With more than a little to hide, they’ve decided on not chasing any more tail… But what happens when a woman comes along who they just can’t say no to?

Will these three learn to trust one another, or has this game been decided before it ever began? Find out!