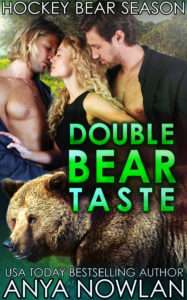 Sometimes, running from your problems leads you right to their solution.

Melissa Morrison has had enough. Enough of cheating fiancees, of public disgrace, and failures one after another. Hiding away in quiet Shifter Grove seemed like the only thing left to do, along with starting a new life. But the curvy, resourceful woman couldn’t have expected that starting from the bottom means flying right into the arms of two men who were not good at taking no for an answer. With danger at her back, along with heartache, accepting that this might be a good thing does not come easy.

Hale and Hunter Scott are banished, there’s no better word for it. The werebear hockey sensations have been sent into hiding from the press after being betrayed by a former lover, leaving both men more jaded than anything else. So when a woman that catches their hearts and minds swoops into their life, they can’t help but be a little bit skeptical… and a whole lot intrigued.

So what’s it going to be? Another chance at love, or the safer bet?