An eternity is only so long. 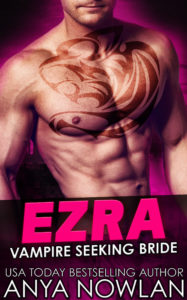 Ezra has been a vampire for… well, he knows what he’s doing, let’s put it like that. But half the fun of being immortal is not having to play by anyone’s rules so when his Maker calls upon him to find a bride and act as a well-behaved vampire would, Ezra can’t see anything but shackles in it for himself. Who would have known that being tied down to the right woman might just make forever sound good again?

Kayla Clarke’s gone from too long to too much. Everything’s going downhill, including her relationship with a man she thought she loved. A handsome, mysterious stranger, first offering to be her roommate and then saying she’s supposed to marry him for eternity, was exactly what she didn’t need in her life.

Throw in a wayward affair from Ezra’s past, an angry vampire husband and a petty feud that might cost someone’s life and limbs and Ezra and Kayla have to deal with far more than either of them signed up for. But maybe that’s exactly what they need.

Ezra: Vampire Seeking Bride is a vampire romance novella that should be read as a standalone. It has plenty of fangs, steam, action and the kind of vampire who is willing to change… for the right woman.