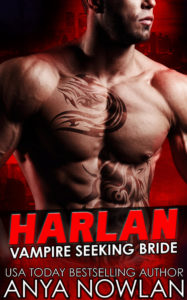 Harlan’s far too old to be messing around with anything that doesn’t give him pleasure. As an experienced and theoretically wise vampire, he’s seen enough to know when to step aside. But when an old friend goes on a rampage and the only way to save the woman he has his sights on is by claiming her as his bride, even the wisest of vampires might make a questionable move.

It helps that he can’t take his eyes off of her.

Ruby Danvers has never backed down from a challenge. As a police officer, she knows that if she gives up, someone else might pay the price for it. This time, it’s her getting caught up as collateral. With a man she can hardly trust by her side, but want just the same, she gets her only shot at payback. If it means marrying a vampire… well, maybe it’s worth it, just this once?

Harlan: Vampire Seeking Bride is a vampire romance novella that should be read as a standalone. It has plenty of fangs, steam, action and the kind of vampire who is willing to change… for the right woman.