I’m very excited to announce that my novel Billionaire Dragon’s Bride is now live on Amazon! It is available as both an ebook and a paperback. 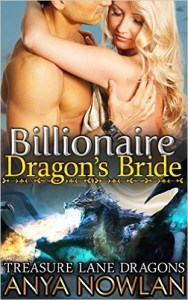 He’s blazing hot and this dragon won’t take no for an answer!

Devon Bluewing is a billionaire playboy like no other. Cocky, strong and sexy as hell, he’s used to getting anything and anyone he wants. But when it comes a time to step up and stand as the head of his family, and the dragon council of Treasure Lane, Devon is met with an inexplicable problem. He needs a mate or his whole legacy could be in jeopardy. Now, that doesn’t work at all for the fire-breathing bad boy, whose used to getting his own way.

Gemma Teeley can’t stand injustice. She’s sassy, smart as a whip and always ready to fight for what is right. So when the newest Bluewing heir decides to wrack up the taxes on her hometown, Gemma isn’t about to stand for it. But what she doesn’t know is that her fight against traditions might just get her into a whole lot of steamy trouble! The curvy, headstrong woman has all the fire of Devon, and when he gives her an ultimatum, they’re both in for more than they bargained for.

Even if she’ll play along, it doesn’t mean that she’ll make it easy on him. But it isn’t just Devon whose making decisions for Gemma, and soon it becomes very clear that it’s not only Gemma’s pride that’s in danger of getting burned…

Warning: Billionaire Dragon’s Bride is a standalone novel with no cliffhangers and a dragon so hot you can’t say no to him. Be aware that there’s plenty of sizzling, blush-worthy heat and intense action and the book is meant for mature audiences.

Read it now on Amazon! 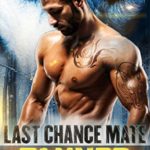