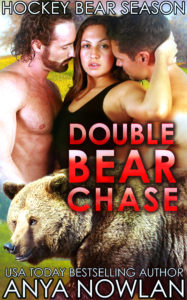 Sometimes, a bear’s problems can be bigger off the ice than on it…

Hanna Radley has put her past behind her and as far as she’s concerned, that’s where it should stay. With her bruises still healing, she’s ready to take on a new life in a new place… but take it very, very slow. So when not one, but two intolerably arrogant and at the same time incredibly charming Alpha bears crash into her life, she’s not sure whether to pull the breaks or go with the ride.

If her past has taught her anything, it’s that going with the flow is not always the right choice.

Finn and Foster Caldwell are masters at getting into trouble, but the hockey star brothers might have met their match. Suspended, they need to make good on their promise to fix up their act. That includes visits with a psychiatrist, which would be unacceptable, if she didn’t happen to be the most enchanting woman they’ve ever met. With problems brewing in their team and their personal lives, Hanna seems to be the only good thing left and the one thing both brothers can agree to fight for.

The question is, can they fight hard enough?